Dedicated RSS readers have fallen out of favor with the rise of online applications like Feedly and Inoreader, but they remain excellent ways to keep up with your favorite blogs, websites and other content producers.

I've been using an online service for some time now. I used the popular Google Reader until it ceased operation and moved to my current online reader. However, my concern over online privacy continues to grow. I decided to download and try out a native client for the first time in many years. I tried the built in readers for both ClawsMail and Thunderbird and was less than pleased. Neither were intuitive and were sort of tough to set up without email, which I have not switched yet, nor do I wish to set up. They might be fine for email + RSS, but they are not so good for stand-alone RSS.

I finally landed on the free and open source QuiteRSS. What an awesome RSS reader. I am once again an advocate of desktop RSS readers. I'll be paring down my online account for phone and tablet use and will be using QuiteRSS.
It's a full featured RSS reader with a built in browser (with ad-block built in!). You have the option of opening items in frame, in a new tab or in your default browser with a simple right click. You can also block images and flash content if you want.

It is cross-platform - It works on Macs, Windows, Linux, BSD and as a portable app.

Set up is absolutely painless. I downloaded a OPML/XML file of my subscriptions from my online reader, imported the file to QuiteRSS and like magic it appeared, ready to read.

The tool-bars are highly configurable and intuitive. They are also attractive.

Filtering and sorting is great. You also have the ability to save and tag posts. Of course, there is also a search function.

QuiteRSS minimizes to the systray and has various notifications for new items.

That said, there are a few caveats with QuiteRSS. It crashes with videos occasionally. Since the Google's latest censorship rage, many content creator's videos have been blocked to anonymous viewers, making it impossible to watch them without signing in. You can't sign in to Google on the internal browser and I'm not sure I want to. For those, I'll probably stick to my online service since Google is getting my viewing information anyway. (Yes, Google Overlords, I like Linux videos on YouTube. I'm not sure why my favorite Linux guy got stuck with an "adult content" label.)

Check out QuiteRSS! You won't regret it. 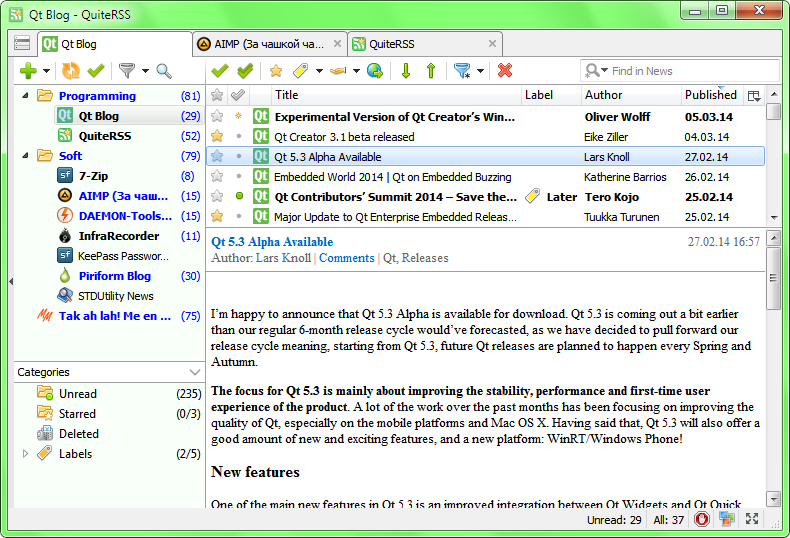 Today's free software is an excellent replacement for any browser that you might be using. I tested Brave Browser out this week and liked it quite a bit. The video from Brave describes it accurately. There are a few essential extensions built into Brave like the ad blocking/ad permission/content creator payment feature.

The content creator payment feature is perhaps my favorite feature. This is the most radical part of the internet right now and it is awesome. People who are being censored by the large companies like Twitter, Google (YouTube/AdSense/Etc) and Facebook are now reliant on direct payments through various means. Brave is just one of the fantastic companies working through the thorny problem of censorship online. You can deny ads that are obnoxious/offensive, permit them when you want to support a creator, and/or support a content creator directly.

There a few password extensions like LastPass, 1Pass, bitwarden and Dashlane. Pinterest and Pocket also show up in the extensions. One of them, Honey (a coupon clipper) seems a bit spammy, but I'm always suspicious of coupon extensions since I've removed so many of them as malware. (The reviews for the Honey extension seem to be okay on various sites.) There are also extensions for natively viewing torrent and PDF files.

You can disable all of the built in extensions, but not remove all of them. I wasn't happy with not being able to remove the extensions I didn't like, but most people will probably be okay with simply disabling the extensions they don't want to use. It's simple.

Brave Browser is configurable, but not confusing. It's easy to import bookmarks and settings from other browsers. It's an ideal web browser for people who don't want to do much in the way of customizing. It's very simple to just download and hit the sites you want to visit with no muss and no fuss.

Go ahead and give it a try!

Today's freebie is a hobby for a lot of people. Jigsaw puzzles. I love Jigsaw puzzles - They are a fun way to pass the day. Jigsaw Planet is one of the best free jigsaw puzzle websites around. They have a huge online community who have created millions of free jigsaw puzzles in all levels of difficulty. Users can create their own puzzles, play puzzles created by others, use key words or search to find specific attributes. You can also share jigsaw puzzles with friends. The site also has weekly competitions. It's super easy to create your own puzzle and complete it. You can also share it to various social platforms like Facebook and Twitter. There is also an embedding feature! Enjoy the beauty of Chris Christie on the beach!
Posted by joy-c at 7:00 AM No comments:

I think that the writer speaks ESL, but this title shows how weasel words can unintentionally infect our lingual habits. (See what I did there?)
Posted by joy-c at 10:52 AM No comments: